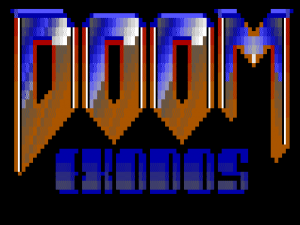 eXoWAD is a collection of levels and total conversions (TC) for DOOM, DOOM 2, Heretic. WAD files were the container file that contained information for games which used the DOOM engine. Custom WAD downloads were ubiquitous in the days of dial-up modems. There were also dozens of shovelware commercial attempts to sell WADs to users, such as the D!Zone collections.

eXoWAD is a a collection of curated WAD lists, provided within an easy to navigate menu.

eXoWAD uses a custom menu known as jchoice. This allows for input with a keyboard, mouse, or gamepad.

Upon starting eXoWAD and bypassing the title screen, the user is prompted with the ability to select a sound card.

Note: Sound card selection only applies to WADs run on the original DOOM ports. Some WADs rely on DOS based source ports, in which case they are typically Sound Blaster only

Next the user is asked if they would like to play using remote multiplayer (via IPX emulation). It is important to note that this has not been tested on every single included WAD or TC. Some WADs were simply not designed to be played in multiplayer and don't spawn correctly. In other cases, there is no multi player due to the WAD relying on a source port.

Currently, there are three lists to choose from:

This list is split into 10 pages. Each page represents a different year (from 1994-2003), and contains what they called the best 10 WADs of the year. Amazingly, 85 of these are still playable, even though many of the levels from the later years required windows based source ports.

Well known total conversions such as Alien's TC are included, as well as a fairly detailed Batman TC. The full list of DOOM World's top 100 WADs can be read by clicking here].

This section houses WADs that were included with other commercial releases. It is a work in progress, however over time more will be added. Currently, the only entry is for Stauf's Mansion. Included on the 11th Guest CD's was a bonus folder. Inside were these recreations of Stauf's Mansion within the DOOM engine. One of the programmers at Trilobyte fancied himself a DOOM creator, and created these in his spare time. The WAD includes secret passages, teleports, and other clever tricks to try and recreate the mansion within the technical limitations of the DOOM engine.

No pack of WADs is truly complete without a look at some of the worst. Downloading WADs in the 1990's was a roulette with a high percent chance of failure. The internet was flooded with half-assed levels that had been created by pre-teens who had spent 5 minutes in a level editor and spray painted their name and a dick on the wall. Many times these levels had fatal geometry flaws, enough bad guys to crash the engine, or just horrible garish color schemes. Or, worst of all, they were just.... boring.

10 WADs were selected to represent this flood of garbage.