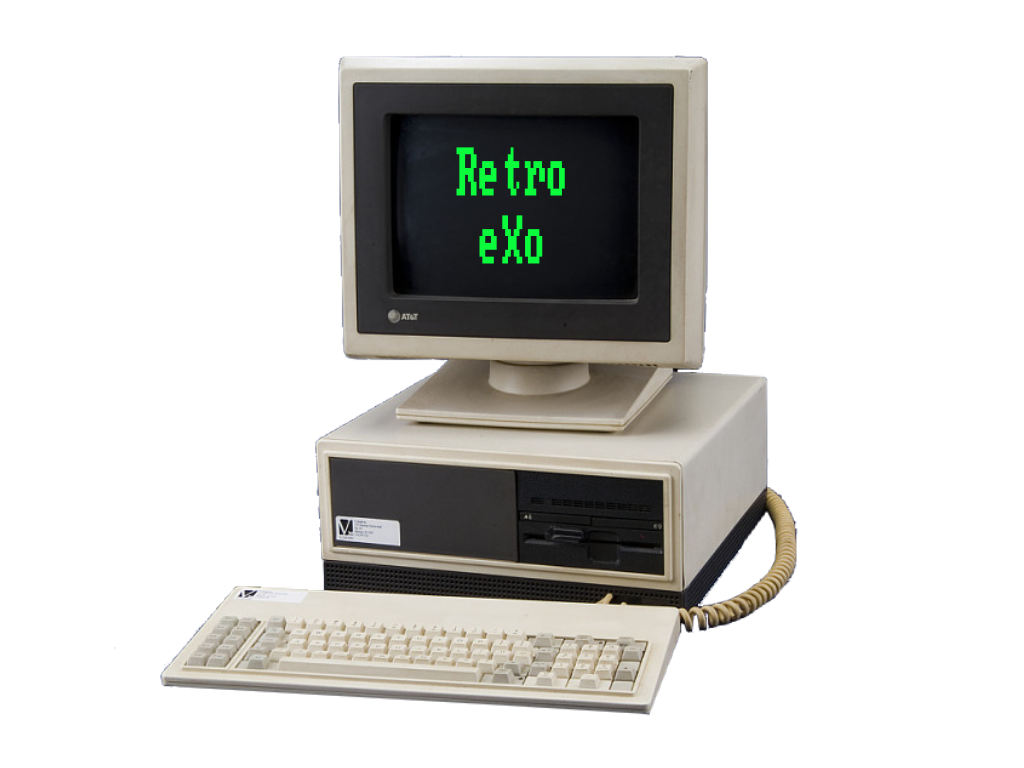 Project Goal
The eXo projects' goal is preservation through playability.


Project Resources
www.retro-exo.com: Project Homepage.
YouTube Channel: Various videos about the project and how to use it.
Discord: Project discussion, chat, & community.
Github: Bugs, submissions, and enhancements are tracked here.

Current Version: eXo's Retro Learning Pack
Release Date: April 1st, 2020
Number of Games: 667 titles, compiled from eXoDOS and eXoWin3x
Upcoming Version: None. RLP Was a one time release. Upon merging eXoDOS and eXoWin3x however, a playlist appears that allows you to select all games that were originally included in the RLP

The eXo projects originated from wanting to sit down and play MS-DOS games without spending hours trying to get them running. Games such as DiscWorld were notoriously difficult and had a fair number of forum posts and websites dedicated to attempts to get them running. However websites centered on the topic of DOSBox, the primary MS-DOS emulator, were generally less than welcoming. eXo's original goal was to get his collection of MS-DOS Adventure games setup in a front end and easily accessible. Posts regarding this project began to appear on Underground Gamer & Pleasuredome in 2007, eventually leading to the release of eXoDOS Vol. I: Adventure in early 2008. This first release had around 650 titles in it, with plans to continue on to a second volume dedicated to role-playing games after excitement was expressed by fellow members on Underground Gamer. It was during this time that eXo became concerned that the nature of DOS emulation was leading towards a scenario in which the number of people who had the technical knowledge to set games up on their own was dwindling. Meanwhile, only a handful of highly popular commercial games for the era were available on any store front. eXo decided to continue tackling volumes of games with the impossible goal of preserving all MS-DOS games. Fundamental changes to the structure of the project were made leading to the release of eXoDOS Version 2. Vol. I-II were re-released along with eXoDOS Vol. III: Strategy (2009). Some of these primary changes included moving the games conf files out of their archive and into the same folder as the launcher. This allowed the conf file to be modified without the need to repack the entire game. eXoDOS Vol. IV: Sim\Sports\Racing\Educational (2011) and eXoDOS Vol. V: Action (2012) were released using the same structure. Releases were originally split into volumes due to bandwidth and storage concerns, however it also helped to focus work on specific packs.

Work on the first 2 versions of eXoDOS was primarily manual. Games were originally identified by hand typing metadata from MobyGames into a database. Each game's launcher, conf file, and install file was copied from a base template and then modified to fit that game, with information like folder names, game name, and other variables hard coded. Soon after the release of eXoDOS Version 2, eXo began to work on a Windows 3x project. This was a very slow process due to the rocky documentation and emulation of Windows 3x. Several improvements were made to the structure of the project during this time however, leading the the release of eXoDOS Version 3. The Windows 3x project was dubbed Win3xO, and released in 2015 with just over 1,000 games in it. eXoDOS versions 1-3 and Win3xO were powered by the MEAGRE front end, which was also originally posted as a member project on the UG forums.

The release of Win3xO led to serious burnout, which resulted in a year long break in the project that coincided with the abrupt deletion of Underground Gamer's website, tracker, and forums. Eventually eXo began work on locating new games for the DOS project while addressing bug fixes within the Windows 3x project. Work continued alone during this time, however with the downfall of UG, discussion at this point was primarily limited to occasional posts on the Pleasuredome forums. During this time the author of MEAGRE, Donarumo, decided to cease development on the front end. He moved his personal collections over to LaunchBox and encouraged eXo to consider it for his projects as well. After a positive discussion with the author of LaunchBox, permission was granted to include it with the forthcoming eXoDOS Version 4 release. Changing to a new front end was a massive task however, as it meant that all metadata (release information, manuals, game images, etc...) had to be imported on a game by game basis. This time was used to begin scrubbing the project of all images that had watermarks, and replacing them with original screen shots and clean box scans.

In response to the decline of participation of forums, a Discord server was started for the project on June 7th, 2018. The community quickly grew with various people who had been following the project for years. The ability to communicate in real time allowed others to find ways to contribute, which quickly led to the formation of the "eXoSquad". This led to a flood of improvements for eXoDOS Version 4, with one of the primary new features being the ability to select advanced sound card options. Since then, a steady flow of new features and improved modules have been created for each upcoming release.

In March of 2020, in response the quarantine protocols and school closings, the RLP (Retro Learning Pack) was released. This pack of 667 games from the MS-DOS and Windows 3.x era was designed to give parents of children stuck at home a way to entertain and educate their children during lockdown. Coverage of the pack extended into the media on sites like Kotaku.

The project and/or creator have been featured in the following articles:

In need of a curator

If you have any interest in assisting with these language packs (or working on an unlisted language pack), please join our Discord server.