The eXoDOS Video Project is a formalized effort to create video snap shots for all of the games in the collection. The project is being headed up by @mgoddard. He has created over 400 video snaps himself and documented a very simple process on getting video capture set-up on your own machine in order to help us fill out the database. 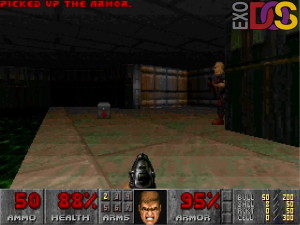 Example still from the eXoDOS video snap from Doom (1993)

A complete guide to creating videos within the project spec can be found HERE.

In order to view the video in the front end, a licensed version of LaunchBox is required. To enable videos you should

Video capture for this project is done using OBS. If you are interested in capturing videos for the project, specific instructions can be found in the guide.

A water mark has been added to each entry to ensure the videos are not taken and sold by websites which attempt to package and sell such materials.

Existing videos are not accepted for multiple reasons. Apart from not conforming the the specs of the video capture above and the lack of a water mark, existing videos do not represent actual gameplay from the project. It is important that the gameplay videos created for this project are captured from the actual eXoDOS game files.